Last night of camping out, I woke up early enough in the morning to capture this sight as the sun was coming up and before the rains came. A good awakening and start to a fine day and week for Team SPAW. July 8th 2013

As we went out snail collecting at Queens bay on the Flathead Lake, I noticed a fine spiderweb out in the middle of the water. A quiet reminder that life is lurking around every bend and in every moment. Taken by Karen Johnson July 6th 2013. 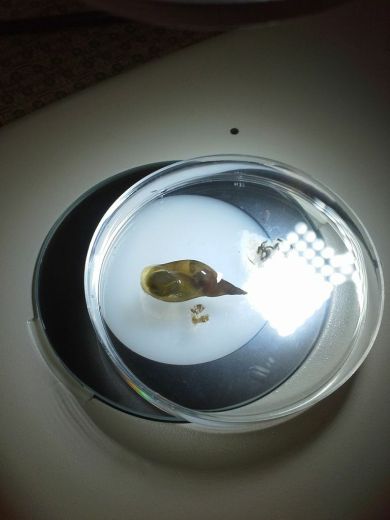 Lymnaea Stagnalis, one likely snail for our studies. Small but contains tons of data. Thank You Team SPAW for a great job at the Flathead Lake. Taken by Karen Johnson, July 3rd 2013

A Sailors Dream…as we searched for our future testing sites, we noticed a strange architectural inspiration and that matched and blended, rather well with the scenery. With Marianna Vasquez-Crede, Kimberly Davis and myself, Karen Johnson at Rocky Point Road, Polson Montana. July 2nd 2013

Fourth of July was good to us. First of all we didn’t have any building access, so we basically worked outside the regular classroom, which was relieving. None the less, we still continued as worker bees getting the job done. We as Team SPAW had an awesome team building experience, with a new addition to the crew and Swimmers Itch world…Marianna Vasquez-Crede. I am so happy to introduce Yanna. We went out collecting on July 2nd. We also had another refresher course on Saturday July 6th 2013, with Team SPAW on Flathead Lake. We used a canoe and collected snails from various points and called it a good day. With the rest of the week we had the 115th Annual Arlee Powwow going on all weekend for some fun, food, shopping, and meeting new and old friends. And back to work for Saturday. It was a fun filled adventure…Thank you team.